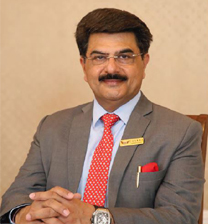 He is Chairman of Integrated Association of Micro, Small and Medium Enterprises of India (I am SME of India), India’s largest SME network and a globally recognised Institution created and run by entrepreneurs. IamSMEofIndia has been awarded 1st Prize as the Most Responsible Business Member Organisation at the National Level- 2017. Quality Council of India has given it a Gold-Rating as a National Level Business Member Organisation.

Mr. Rajive Chawla, popularly known as the Face is universally known for introducing various programs for accelerated and sustainable growth of Small Businesses and Startups. His latest program called GAPS: Growth Accelerator Program for Small Businesses is revolutionary and being followed and adopted in more than 20 Clusters across India.

Rajive Chawla is the Chief Mentor at the one-of-its-kind SME Habitat Centre in India called- BASIC- Business Accelerator, Startup, Incubation. Located at Faridabad in Delhi NCR, BASIC has nurtured large number of successful Startups that have emerged successfully like: The Reading Glasses (You write, we Publish), Built Natural (High fashion Sportswear made out of Recycled Plastic), AltooFaltoo.com, WeFlyBest, AapKayLiye and many more. BASIC has also contributed to scaling up and acceleration of hundreds of MSMEs in the country.

Mr. Chawla has served as Director on the Board of various Banks and Subsidiary Companies.

Mr. Rajiv Chawla was Director (Independent) on the Board of The National Small Industries Corporation Ltd. (NSIC) for six years 2010-16.

He is on the Governing Councils of various Educational Institutions and visiting faculty to many Universities & Institutions.